Rosie the Penguin Gets Special Care from OdySea Aquarium 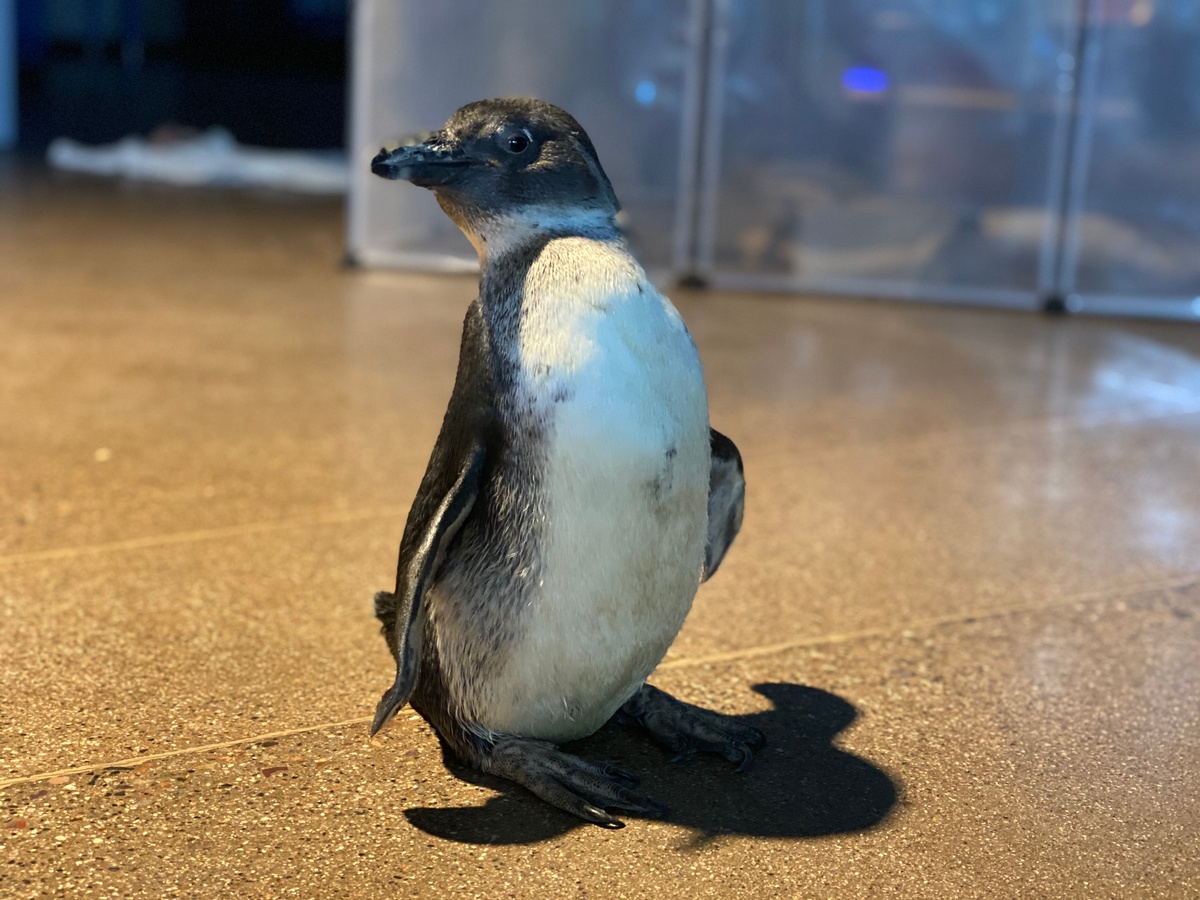 We already love OdySea Aquarium and their dedication to ensuring everyone gets to experience the aquarium, no matter ability. Going beyond their Pal tools to help guests, OdySea Aquarium also works hard behind the scenes to make sure animals of ALL ABILITIES get the best care and life possible. Which brings us to 8-month old Rosie, an African penguin living with disabilities.

Rosie hatched in early December 2019 to first-time parents Mojo and Lemieux at the Penguin Point exhibit. The Animal Care Team was excited, eager to watch another chick thrive at OdySea Aquarium. She became penguin #39 in the colony and as the first offspring to new parents, Rosie was considered genetically valuable to the endangered African penguin species.

“All penguin chicks are adorable. But there was something special about Rosie that made her extra endearing to us right from the start,” said Jessica Peranteau, Director of Animal Care and Education. “As Rosie’s story unfolded, it was her motivation, as well as the way our teams came to together to provide ‘outside the box’ care for her, that made us feel inspired. Rosie is a great reminder of perseverance, especially with what is happening in the world today.”

As the ninth chick to hatch at OdySea Aquarium, the experienced Animal Care Team typically remain hands-off as much as possible, allowing penguin parents to rear their offspring. The first-timers Mojo and Lemieux were enthusiastic parents, fussing over their chick, taking turns feeding and incubating their baby to keep it warm. Health exams, or “chick checks,” were performed regularly, in which the baby was briefly retrieved from the nest, giving OdySea Aquarium’s Director of Animal Health and Veterinarian Dr. Eric Anderson and his team the opportunity to physically examine the baby bird, record vitals, weight, and developmental milestones. The exams revealed Rosie was putting on weight, and growing, a strong indication the doting parents were successfully feeding their baby.

However, the team also noticed Rosie’s inability to sit up on her own, and a bit of misalignment of her feet. When chicks hatch, they are unable to sit up on their own for several days and instead rest on their bellies warmly underneath their parents. There was no red flag until the team saw less than ideal progression in achieving that milestone.

To keep round the clock observations on the bird family, the team installed cameras on the nest to watch the chick and parents’ behavior without intrusion. The cameras gave insight to Mojo and Lemieux’s parenting and a closer look at little Rosie’s life in the nest. Turns out, the Team wasn’t the only curious ones; a few penguins were found crowding the nest—trying to push their way inside. A decision was made to corner off a special ‘nursery’ area that kept nosy neighbors out and allow Rosie’s parents secure space around the nest to roam while taking turns on the nest.

“We suspected the parents may have been overly protective and may have been hunkering down on the chick a bit too enthusiastically when other birds in the colony were nearby,” said Peranteau. “Our fear was that in their attempt to protect and incubate their baby, they were inhibiting Rosie’s ability to move about the nest area on her own and appropriately develop.”

Nest cam observations confirmed that the helicopter parenting of Mojo and Lemieux needed some intervention. Rosie was taken off exhibit and further medical tests were performed on her by Dr. Anderson and his team. Radiographs revealed skeletal abnormalities on little Rosie.

“Despite the evaluations and tests, we could not conclusively determine if she hatched with these abnormalities or if the parents were a little too zealous in their care for her,” said Dr. Anderson. “What we did know was that she was eating well, growing consistently, and did not appear to be in any discomfort. She had some obvious physical challenges, and the next step was to devise a plan to help her adapt and thrive despite these obstacles.”

The penguin team got to work! The goal was to help strengthen her core and leg muscles and get her from laying on her belly to sitting upright, bearing weight on her legs and feet, and eventually walking. There was lots of collaboration. There were many ideas…and diagrams. There were trips to the hardware store and a stop at the fabric store too.

They settled on a “penguin jump-a-roo” that mimicked the popular human “Johnny Jump Up” baby bouncer seat that typically attaches in a doorway. The infant jumper that helps build core muscle development and exercise for a human baby seemed ideal for developing Rosie’s strength. However, one small enough for a baby penguin did not exist. So, they built one!

Peranteau purchased a “micro-preemie” onesie, elastic straps, and gromets. She sewed one end of the elastic “suspenders” to the shoulders of the onesie and attached gromets to the other end, so it was an adjustable “sling.” The team then secured it to a PVC pipe frame they built in-house to safely support Rosie as she participated in her therapy sessions. 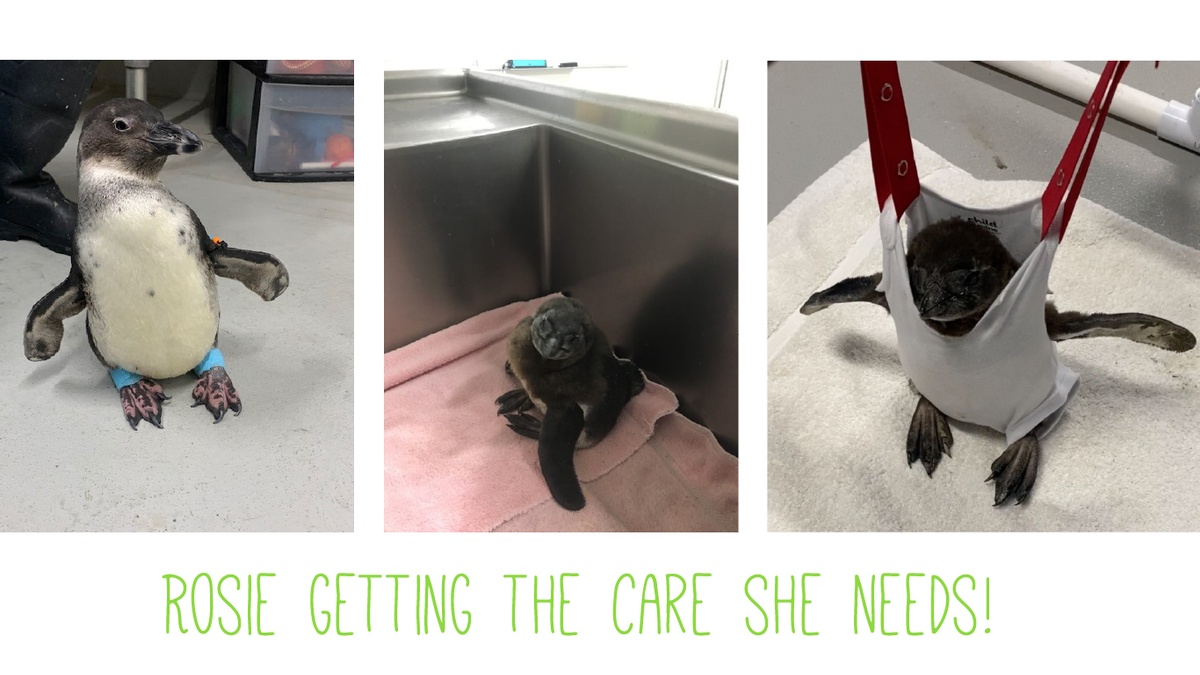 “We became engineers. We tweaked and altered our device based on Rosie’s reactions and in conjunction with Dr. Anderson’s prescribed therapy,” said Peranteau. “Her first few times in the sling, we kept it very short, allowing her to get used to the contraption as well as her new posture.  We encouraged her to lift and move her feet, so she could develop the necessary balance involved in walking.”

The team created a therapy schedule and stuck to it, carving out time from their already hectic day caring for the entire colony of almost 40 birds to work exclusively every day with Rosie. Eventually they removed the straps from the PVC frame and took Rosie on very short ‘walks,’ supporting the straps from above—like a marionette—getting her used to the sensation of being upright while having forward momentum instead of standing in one position.

Though she fatigued quickly at first, after time, results showed. By mid-February, Rosie was able to sit upright and take a few steps on her own without the support of the sling. The team continued to work with her daily, intermittently using sling therapy and short ‘sling-free’ walks throughout the aquarium with the Animal Care Team. She became stronger with each day and found the walks to novel areas of the Aquarium very enriching as well.

By April, amid a global pandemic that forced OdySea Aquarium to close and reduce staffing, Rosie and her daily therapy schedule remained a priority to the remaining team. She was four months old and had fully molted her baby down feathers to reveal her waterproof, juvenile plumage. She was now ready for water therapy through supervised swims in her exhibit pool, and Rosie immediately found pool time to be incredibly reinforcing. The team was ecstatic!

“An Animal Care Specialist was always in the water with Rosie when we first started aquatic therapy to ensure she could right herself to take breaths and get out of the pool safely,” said Peranteau. “She now swims on her own and has navigated the easier exit points of the pool to get out without assistance. She seems to really love the water and the socialization with other penguins that swimming brings.”

Over these past eight months since hatching, Rosie has proven to be an eager student and resilient to the disadvantages she has been dealt. Though it may be easy to identify her in the colony by the difference in her gait or her unique “shuffle,” her disabilities do not keep her from being a member of the larger colony. Like the other penguins, Rosie loves eating, learning new behaviors, cuddling, and swimming. Not surprising, her bond is strong with the Animal Care Team and she is keen to tag along exploring areas of the Aquarium outside of Penguin Point. The team still practices physical therapy with her but is slowly pulling back on the assistance and allowing her to become a fully independent penguin.

The Animal Care Team at OdySea Aquarium—which welcomed guests back in late May along with many precautions to keep everyone safe—has learned a lot about determination and ingenuity through Rosie. Her name alone reflects strength and tenacity, as she has appropriately been named after Rosie the Riveter for her resilience, and to celebrate the “We Can Do It!” mentality of the team that surrounds her with love.

Back to all News & Press

Be a hero for families with disabilities!

Help us grow the number of Pal Places to support inclusion for all.